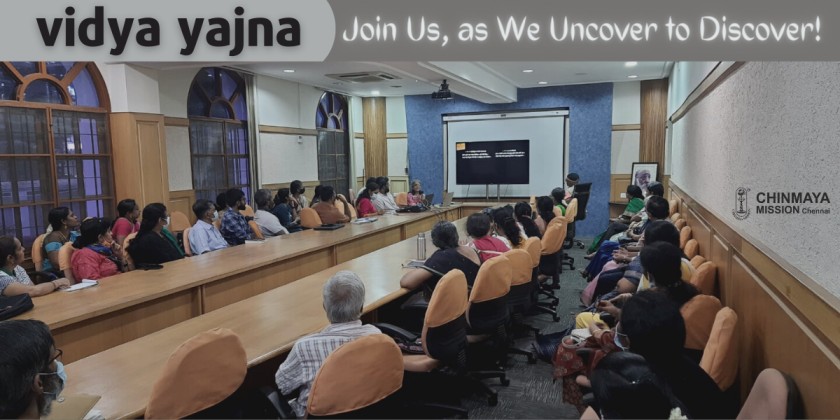 Join Us, as We Uncover to Discover!

‘Let us be Hindus’, thundered Swami Chinmayananda in His first address to the public held in Puna on 23rd December 1951. Swamiji had probed the listener, ‘To try to enquire into the very textbooks of our religion with a view to knowing what Hinduism has to preach, and how its message can be brought out to serve in our day-to-day life’s problems is our main aim of the hundred days’ Upanishad Jnana Yagna’. Thus began the Masters’ march towards sharing his wisdom to the masses.

In continuation of that same objective and as an offering to Swami Chinmayananda, in August 2021, Chinmaya Mission Chennai took up a new initiative called the Vidya Yajna. 14 teams were created to enquire into 14 textbooks of this grand religion with a view to know what Hinduism has to teach and how its message can be used in our daily lives. This initiative was started under the able guidance and inspiration of Swami Mitrananda, the spiritual mentor of Chinmaya Mission, Chennai. It now has over 50 plus sevaks each devoting five hours monthly towards this cause.

Each study group has selected relevant reference materials for each of their texts and members are expected to complete their share of self-study and present it with others during weekly team meetings. Reflections and insights are documented and consolidated for periodic review with Swamiji at study group level. Progress so far has already unearthed pearls of wisdom which has left each sevak wonderstruck by the richness of our scriptures, slowly enabling us to find meaning to the Master’s words.

Stemming from the previous review and peer sharing meeting, the insights from each of the groups is shared here.

The Vedas are revered as the Shruti Mata . She is unadulterated, as she (knowledge) was received directly by Rishis from the cosmos. Each Vedic mantra is a poetic revelation received by a human sage during a deep state of concentration.  A sage to whom a Rik mantra has been revealed is a Rishi. The Vedas let us know the mysteries of existence, knowing which, our lives become more meaningful.

It is a powerful guide on how to lead a disciplined life of prosperity and peace, with a key focus on how to build a peaceful and Dharmic society. However it has been observed that some portions of this scripture do not appear to be pronouncements of the noble Manu. Instead they appear to be later additions by vested individuals, which needs scrutiny .

Famed to be one of the earliest books in Shaivism on Tantra, Mantra, Yantra and Yoga, which follows Advaita philosophy, as it interprets ‘Tatvamasi’ unlike other Shaivaite texts which follow Dvaita philosophy. An authentic work in Tamil on Kundalini Yoga and Tantra Shastra. It imparts the basic principles of Shakti worship.

Yoga is much more than physical exercises (asana). It is the cessation of the thoughts in the mind. The path of raja yoga is methodical and guarantees samadhi (cessation of mind) for anyone who follows the eight steps (Ashtanga). Patanjali starts the text with “atha” or thus - an interesting way to start. He believed that the real practice of yoga begins only when we choose to reach this text and understand it.

It is one of the 18 main Puranas. Characteristically, Puranas have portions on Creation, Destruction, Reign of Manu, Lineology of Solar/Lunar dynasties and the history of those rulers.

Garuda Purana contains elaborate sections on methods and modes of worship of various deities apart from epithets and praises on Lord Vishnu. It is home to the Highest Truth as revealed by Vishnu to Garuda, later Garuda to Kashyapa and  then Kashyapa to Suta Maharishi and others.

It’s an anthology describing the lives of 63 Nayanmars (saints of saivism) written by poet Seikkhizhar. The Puranam is "big" in the sense that each saint who served Lord Shiva, stood on their ideals, and were ready to give up even their lives to honour their words during their services to Shiva or His Bhaktas. Contains authentic historical facts, description of ancient temples, geographical settings of  kingdoms of Cholas, Pandiayas,Cheras and other smaller rulers, beautifully portraying  the rich landscapes of Tamil Nadu .

The biggest tale ever written in the world sweetly encompasses within each story and glory of its characters, wise takeaways which serve as a guide and mirror our weaker tendencies and potential pitfalls. Some of the key takeaways are:

- All our lives have a purpose

- Do not get carried away by worldly pleasures

- Devotion to one’s teacher (Guru bhakti) is a powerful shield, which always protects us

Even the first canto of Valmiki Ramayana can leave one in awe as Bala Kanda beautifully unfurls so many inspiring qualities of Sri Rama. He is described as someone who is extremely curious, committed to work, extremely dedicated to his Guru and as one who is always at their service besides being an ideal child, sibling and spouse. It is said that Shri Rama played each role perfectly in adherence to Dharma.

The Bala Kanda also deals extensively on how a kingdom should be run with efficient ministers and city planning.

Kamban was a seeker, one who was ridiculed and tested but nothing could deter him as he fortified in Bhakti.

His work is an evolution of Tamil language, where utmost care has been taken to keep the core of Valmiki's Ramayan intact. He has brought out the same divine painting of Shri Rama with some added colours and imagination.

If any of these insights have excited you, kindled your thirst for knowledge, ignited your curiosity to know our scriptures more, do join your team of interest in the Vidya Yajna. The discussions happen online

Researchers, volunteers and sevaks from world over are welcome to join us in this journey.